A primer on what dependency injection is and why it is useful in JavaScript.

In my article and presentation “The 3 D’s of Modern Web Development” I explain what I believe are critical elements for success in modern JavaScript frameworks.

Wait, you didn’t see my presentation? That’s OK … when you have just under an hour of time to invest, I believe you will receive value by watching it here.

Dependency Injection is one of those elements. I find developers often struggle to understand what it is, how it works, and why it’s even necessary.

I learn by doing and hope a simple code example will help explain. To begin with, I wrote a very small application that assembles and runs a car. The dependencies look like this:

Think of the parts as dependencies between components.

You can see the code and run it interactively here:

The output should be what you expected. 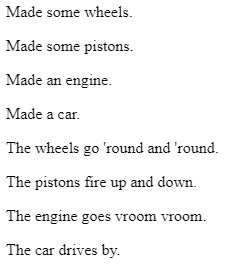 Great! So far, we have something that works, and we didn’t even have to install a fancy framework. So, what’s the problem?

The code works but is very simple. The problems come into play in a much larger application. Imagine having hundreds of components with dependencies … now you will run into some issues:

To keep it simple, I’ll just include the code that changed. Notice that instead of directly creating dependencies, the dependencies are now passed into the constructor functions.

You can view the entire app and run it interactively here: https://jsfiddle.net/jeremylikness/8r35saz6/

Now we’ve applied the Inversion of Control pattern and are doing some simple Dependency Injection. However, we still have a problem in a large code base. The previous issues (#1 and #2) have not been addressed. Notice that the objects must be created in the right order. Including or creating them out of order will result in failure. This makes it complicated to develop in parallel or out of sequence (and believe me, it happens with larger teams). A new developer on your team will have to understand all the dependencies to instantiate a component in their own code.

Again, what we can do?

The solution is to bring in an IoC (short for Inversion of Control) container to manage Dependency Injection. There are many types of containers, but here’s how they typically work:

First, I’ll include a very small library I wrote named jsInject. This is a library I wrote specifically to learn about and understand dependency injection. You can read about it here: Dependency Injection Explained via JavaScript, but I recommend you wait until after this article. After you are comfortable with DI and IoC, you can dig deeper to see how I created the container. The library does many things but, in a nutshell, you pass it a label and a constructor function to register a component. If you have dependencies, you pass an array with those dependencies. Here is how I define the Pistons class. Notice the code is almost 100% the same as the last iteration, except for the line of code that registers the component.

To get an instance of the class, instead of creating it directly, you “ask” the container for it:

Easy enough! What’s important to understand is that you can now develop in parallel and independently. For example, here is the Engine definition. Notice it depends on pistons but doesn’t explicitly reference the implementation and simply references the label.

In fact, in the example I created, I define the Car and Engine classes before their dependencies, and it’s completely fine!

You can see the full example here (the $$jsInject library is included at the bottom in minified code): https://jsfiddle.net/jeremylikness/8y0ro5gx/.

The solution works, but there’s an added benefit that may not be obvious. In the example I explicitly register a “test engine” with “test pistons.” However, you could just as easily register the “pistons” label with the TestPistons constructor, and everything would work fine. In fact, I put the registrations with the function definitions for a reason. In a full project, these might be separate components. Imagine if you put the pistons in pistons.js and the engine in engine.js. You could do something like this:

That would work to create the engine. Now you want to write unit tests. You implement TestPiston in testPiston.js like this:

Notice that you still use the label “pistons” even though you register the TestPistons constructor. Now you can set up this:

DI isn’t just good for testing. The IoC container makes it possible to build your components in parallel. Dependencies are defined in a single place instead of throughout your app, and components that depend on other components can easily request them without having to understand the full dependency chain. “Car” can request “engine” without knowing that “engine” depends on “pistons.” There is no magic order to include files, because everything gets resolved at run time.

This is a very simple example. For a more advanced solution, take a look at Angular’s dependency injection. You can define different registrations (called Providers) such as types (via TypeScript), hard-coded values and even factories that are functions that return the desired value. You can also manage lifetime or scope, for example:

As you can see, although people often use them interchangeably, Inversion of Control (IoC) and Dependency Injection (DI) are related but not the same thing. This example demonstrated how to implement IoC, how to add DI, and how to use an IoC container to solve problems.

Do you have an idea or suggestion for a blog post? Submit it here!

This post originally appeared at Dependency Injection in Javascript 101

« From Angular to Blazor: The Health App MongoDB on Windows in Minutes with Docker »