The Year of Angular on .NET Core, WebAssembly, and Blazor: 2019 in Review

The JavaScript monopoly is broken

What an awesome year! 2019 had lots of great milestones. Every year of my professional career has been exciting, and 2019 was no different. It was my first full year living in the Pacific Northwest and my second full year employed at Microsoft. I continued to travel the world.

I had to pause for a moment writing this blog post to celebrate 25 years (cough, yes, cough, a quarter century) of earning a living doing what I love: writing code and empowering developers to do the same. This is a quick, personal look back at the arc my career has taken. (Not interested? No problem - click here for the next section).

…and immediately thought to myself, “Good for him.” I knew it a had to be a great role for him to make the switch, and I enjoyed watching the updates coming from the team with envy. I wasn’t unhappy and wasn’t looking, but a random email would change everything. A recruiter from Microsoft reached out, and after overcoming my initial shock (“Why are they interested in me?") I went on to interview and, well, here I am today, a Cloud Developer Advocate. What will the next 25 years bring?

Let’s get into some more interesting goals and stats. For reference, this was my 2018 post.

How did I do with my goals for 2019? Here are my retrospective comments.

The Goal: get back into a regular fitness routine and closer to my “fighting weight” of 200 pounds

The Result: ⚠ mixed … although I’m not closer to 200, I’ve managed to keep a regular training routine throughout the year. I was mostly jogging and doing bodyweight calisthenics in the summer and fall and shifted to more weight training in my home gym for the cold, dark winter months.

The Goal: summit a mountain I haven’t been on before (sound familiar?)

The Result: ✅ success! I successfully reached the summit of several new mountains, including:

The Goal: ski for the first time in years

The Result: ✔ tentative success … as of this writing I plan to ski the last week in December.

The Goal: speak to an audience of more than 1,000 (quantity doesn’t matter, but it’s a bucket list item that makes it easier to speak to larger audiences moving forward)

The Result: ✅ success! I achieved this goal multiple times the past year, thanks to Microsoft Ignite | The Tour and an invitation to keynote CodeStock.

The Goal: vacation with my wife in a place we haven’t been before

The Result: ✅ success! We had an amazing mini-vacation in Oregon.

…then, we took a longer trip down to Baja Mexico.

The Goal: increase my giving (not just dollars, but mentoring, community service, etc.)

The Result: ⚠ I can still do more here.

In other news, my daughter graduated college with her Bachelor of Political Science at 19 years old (with an awesome GPA).

Sadly, my brother-in-law was diagnosed with cancer and died within the year. Rest in peace, Steve!

Health is a goal of mine and it’s a topic not discussed enough in technology. For that reason, I’m going to start including health statistics in my year end summaries. Not interested? Jump to Open Source.

My average resting heart rate ♥ was 48 beats per minute. I’ve always had a low heart rate and it slows when I train consistently. My most recent blood pressure reading was 117/79. My most recent cholesterol reading was 193 (44 HDL, 113 LDL). In spite of following a 100% plant-based (vegan) diet for five years, my levels of B12, iron, Vitamin D and Calcium all remain normal.

I have hypothyroidism and take medication to regulate my thyroid hormone levels.

In the past year I developed a tremor in my left arm. Initially it was just an issue of my hand shaking randomly, but more recently I’ve lost dexterity in that hand and have trouble articulating my fingers. The main negative impact is that my typing speed has slowed. I’ve seen seven different doctors who inspected my wrist, elbow, shoulder, and neck, including taking MRIs of my neck and head, and still have no diagnosis. The next step is a special scan to rule out Parkinson’s disease. It will be interesting looking back at the end of next year to see how my quest to diagnose and treat this tremor unfolds.

I continued to work with docs, but a major difference was the result a focus on making my presentations more “open source” and not just publish the source code but include “train the trainer” content to make it easier for other presenters to reuse my work. I 100% support forking my presentations and code to either present to a new audience “as is” or customize/personalize and save time getting a new presentation done. This is all part of my personal mission to empower developers, and one way to scale is by enabling other presenters. This is why I also wrote a 9-part Comprehensive and Practical Guide to Technical Presentations.

My followers grew from 11,524 in 2018 to 13,102 this year. That’s a 14% increase and about equal to my growth in 2018 (about 4 followers per day). Followers don’t mean much if they are bots or don’t read and engage with content, so my one Twitter-focused goal was to increase engagement.

The Result: ✅ success! I had a record year of engagement. I also hit a personal record with one million tweet impressions in a single month! This wouldn’t have been possible without an engaged network willing to retweet content. 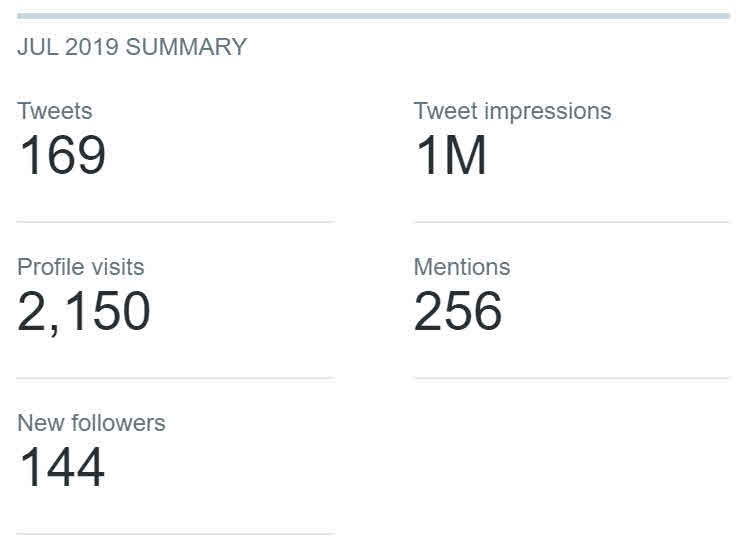 As always, the following stats are based on the last 90 days.

The interests of my followers shifted slightly from previous years. The top five interests include:

Although the percentage is “down” it really means my followers have more diverse interests, so I see the change as a net positive. 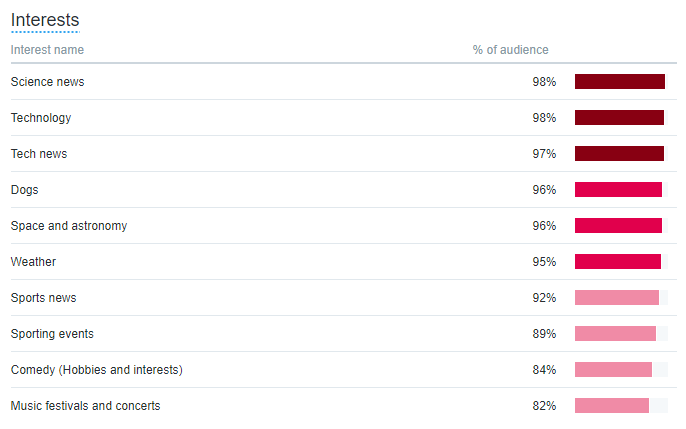 I gained more international followers this year as the percentage from the United States dropped from 41% to 38%. The top five counties following me in order outside of the U.S. are:

There are a lot of other stats that I don’t pay too much attention to as they are more geared to marketing than having engaged and empowered followers.

The most impressions for any tweet this year was a reference to a Microsoft Learn module with a hands-on lab to build a real-time app.

Hands-on, step-by-step lab with full sandbox (no #Azure subscription required) shows how to build a real-time #webapp and process updates with #SignalR and Azure Functions @AzureFunctions then host it in Azure Storage with Static Websites: https://t.co/1Z9WbHyfnr pic.twitter.com/QEnPITJ4UV

My top mention (don’t @ me!) was a post by Christian Nwamba that featured a picture with Anders Hejlsberg, the creator/co-creator of C#, TypeScript, Turbo Pascal and lead architect of Delphi.

Finally, the top “media tweet” was a post showing how to build, edit, view, design, and deploy Azure Logic Apps.

Did you know you can 🚧 build, 📝 edit, 👀 view, 🖼 design, and ⬆ deploy #Azure #Cloud ☁🖇 integrations using Logic Apps directly from #VisualStudio @Code? Here is a step-by-step tutorial showing how: https://t.co/K8YvNSANWn pic.twitter.com/1SA2vOItbq

Although Twitter is an important way for me to connect with developers, my focus last year was on authoring more original content and not simply curating other articles.

The Practical Developer: A New Place

Last year I joined a new community called dev.to. It is an open source project and incredibly welcoming community with daily posts, discussion, polls, and more. I authored some original content and began syndicating articles there. After my initial post in April 2019, I had:

Last year was flagship year for my blog. Although I moved it (again), this time I preserved the domain and links so I have a consistent view of traffic. I ported it from Medium to Hugo and wrote a series of posts about the migration. This allowed me to take full control over the site, code, and templates. I was able to build a CI/CD pipeline that allows me to edit posts in markdown then commit to my GitHub repo to publish. In addition to open sourcing my blog, I also implemented it as a Progressive Web App (PWA). Over the year I received 96,047 visitors over 123,961 sessions, about a 30% increase from the previous year. Countries were similar with a little more traffic incoming from Germany and the Netherlands compared to the past.

Almost three-quarters of incoming traffic is from organic search. 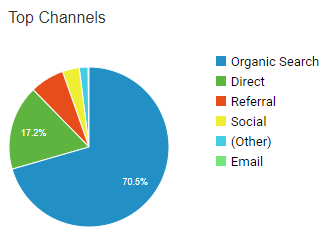 Acquisition for Developer for Life in 2019

7 out of the top 10 search terms driving traffic to my blog included the word Blazor. Other popular terms were Mongo DB, Docker, and Angular.

Here are the top 10 pages. The data is slightly skewed because the links under root (no /blog prefix) are redirects to preserve the original URLs from Medium. 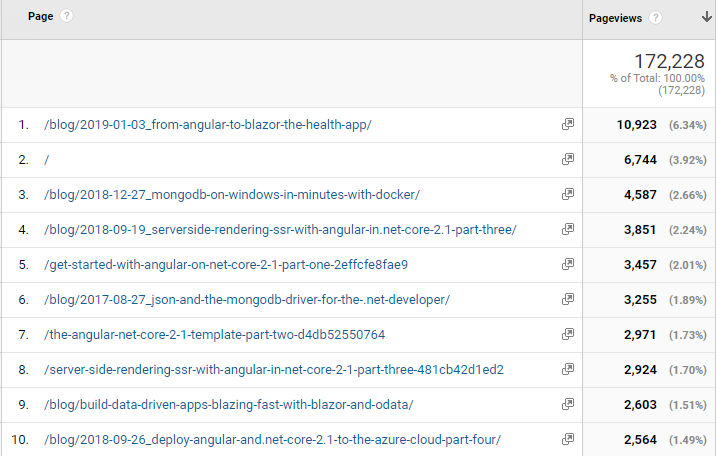 As you can see, popular topics included Angular on .NET Core and Blazor.

I’ve been running a custom serverless link tracker for a few years now and use it to understand what followers and readers are interested in. For 2019 I analyzed just under 200,000 clicks (down about 9% from last year, but I’m also writing this earlier). A few notable data points: 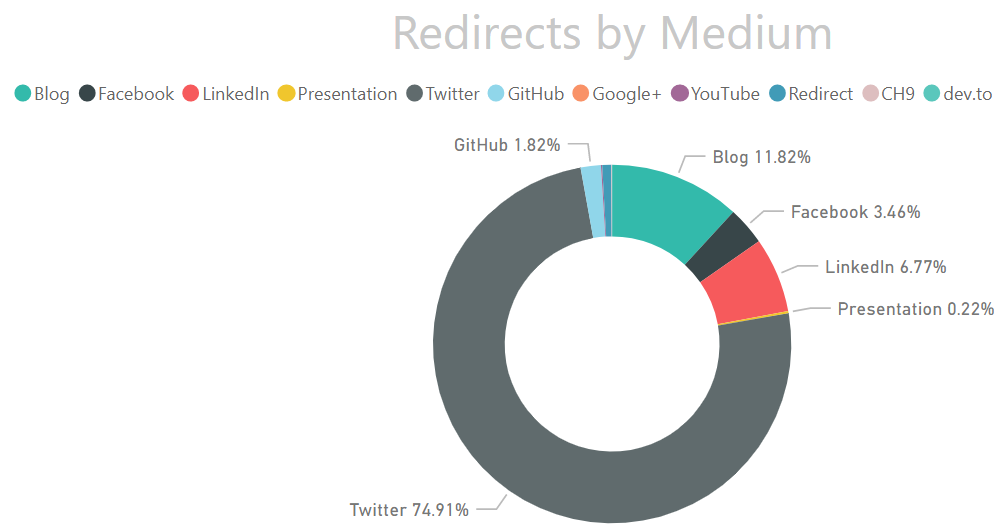 Redirects in 2019 by medium

Twitter continues to dominate the source of clicks. Compared to last year, I saw increases in activity from GitHub, my blog, LinkedIn, and Facebook. In fact, although Facebook barely registered last year, it accounted for 3.5% of traffic this year. I have a dedicated Facebook page for Jeremy Likness that I post data to. (No, I’m not suddenly referring to myself in the 3rd person, that was for the search engines.)

The top five clicked links (aside from my blog homepage) last year were:

The most popular ongoing source of links included the Blazor-related articles on my blog and my GitHub repo with a hands-on Blazor walkthrough.

The top three sites I sent traffic to were:

The top three clicked tweets based on my own link tracker were:

I decided to run another 🕸 #WebAssembly experiment.
This time, I decided to go with 🦀 Rust #Rustlang to generate the #Wasm to tap into the power of @rustwasm.
I was blown away by what I found!
Read about the journey to supercharge #JavaScript here:https://t.co/y94HXdY1dE pic.twitter.com/GLO63An83p

17% of clicks were from mobile devices.

If there is one word that sums up 2019 for me, it’s Blazor. Many .NET developers around the world are embracing this new platform. WebAssembly has officially broken JavaScript’s browser monopoly and is empowering C, C++, C#, Go, Rust, TypeScript and other developers to build full stack experiences without having to leave the language of their choice. When I look back at the past three years, I see this trend:

I’m often asked what I think the “next big thing” will be. I believe that 2020 will be the year that WebAssembly and modern JavaScript truly shine. We’ll see WebAssembly appearing in places outside of the browser and tooling evolve to embrace building experiences that need only target a single platform to run everywhere. Developers are closer than ever to building experiences for every platform, including servers, laptops, tablets, mobile phones, gaming consoles, edge devices and web browsers, with the language and tools of their choice. What an exciting time!

« Blazor: .NET in Your Browser Client-side JavaScript Databinding without a Framework »