A look back at tweets, blog posts, and link clicks in 2018 with the stats to prove it.

Last year was my first full year at Microsoft. It was a year of change for me as I relocated across the country and traveled around the world.

A bit of ice on the ole goatee

According to TripIt I enjoyed 18 ✈ trips, lived out of my 💼 suitcase for 100 days, and acquainted myself with 35 🏙 cities across 11 🌍 different countries (although several of the countries were just layover stops).

Every year I like to reflect on the past 12 months, gather whatever insights I can and focus on the year ahead.

How did I do with my goals for 2018? Here are my retrospective comments.

The Goal: Speak internationally (and not just once)

The Result: ✅ success! I visited (and spoke in) Bulgaria, Singapore, Poland, Russia, and Switzerland.

The Goal: Find a home and relocate to the Redmond, Washington area

The Result: ✅ success! On Twitter, I chronicled my travels across the country to relocate in our new home just north of Redmond. Just click on the tweet below to expand the full thread, or read it here.

We ended up in an amazing new home. Here’s a view of Mt. Rainier from our front deck:

The Goal: Engage heavily in the amazing giving opportunities that Microsoft provides its employees

The Result: ✳ close … I definitely engaged with matched donations but can do better in the future.

The Goal: summit a mountain I’ve never hiked before

The Result: ❌ nope! I can’t say I made the summit of anything I’d call a mountain, but I certainly did go on a few good hikes!

Although I didn’t set them as goals, I had three other key accomplishments:

Wow! What a year.

I am extremely happy that several of my talks were recorded so that I can share them with those who are unable to make it to the conferences. I really enjoyed presenting The Three D’s of Modern Web Development. Choose the Videos tab on my blog for more presentations.

That’s it for the deep retrospection … let’s move on to the technical statistics and insights!

In 2017 I had closer to 400 contributions. I worked more frequently with docs and traveled less. I don’t contribute to many mainstream open source projects, but I do make all of my demos open source and create online tutorials when I can.

For example in 2018 I created a TypeScript sample to demonstrate how to use decorators for property change notifications on view models (tsviewmodel). My TypeScript from JavaScript repository contains a series of commits that refactor JavaScript code to illustrate firsthand how TypeScript helps find and fix defects up front and makes your code easier to read, build, and maintain. I also recently created a Blazor Health App that I’ll blog about in the coming weeks.

I don’t really set goals for OSS contributions because it’s quality over quantity and I want to do what feels natural. We’ll see how that works out in 2019!

The increased visibility of my new role combined with more presence at conferences around the world resulted in a jump to 11,524 in 2018. That’s a 14% increase and an average of about 4 new followers per day.

The Goal: continue to deliver a high signal-to-noise ratio of content

The Result: ✅ success! I consistently delivered technical content throughout the year and received positive feedback about my feed.

The Goal: focus on “in person” followers at events such as user group meetups and conferences

The Result: ✅ success! The higher average follow rate can be directly attributed to surges in followers at in person events.

The Result: ✅ success! I made an effort every day to engage in conversation. I also opened my direct messages (so anyone can DM me, even if I don’t follow them back) and created many connections through messaging.

The following statistics are based on the last 90 days of activity.

I feel like I may have more followers focused on my core goals (technology and development) but it is interesting to pick up “weather” (shall we talk about the weather?) and, of all things, dogs as a top interest. Sorry, cat lovers! 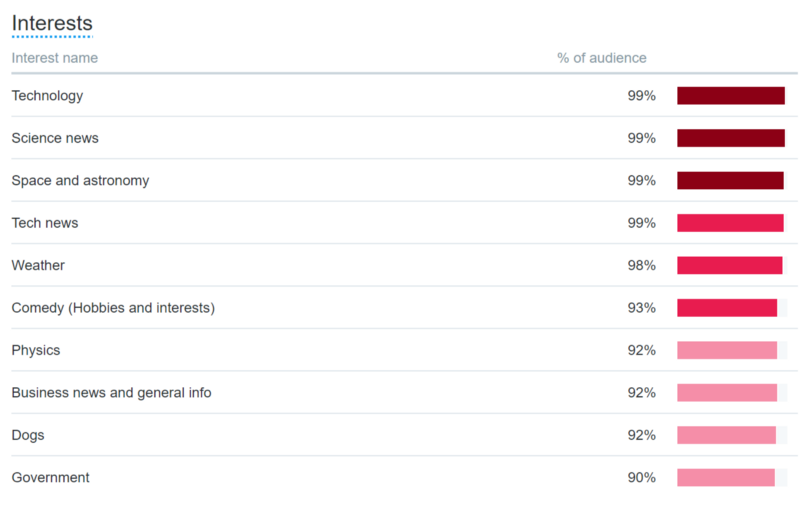 I am extremely happy about seeing progress in another area. Last year 13% of my followers were female, this year that increased to 20% or 1 in 5. It’s still not representative of what the industry could be, but the increase hopefully reflects that my content and feed are welcoming to everyone. Twitter should provide demographics about who we follow too (does it, and I missed it?) because I’d like to make sure the part I can directly influence — the voices I hear in my own feed based on who I follow — is diverse and not an echo chamber.

I don’t have updated age demographic stats, and my country demographics remained the same (41% United States, 8% United Kingdom, 6% India, 3% Canada, and descending from there). I do know Twitter doesn’t collect the same demographics from every country so those numbers may be skewed.

The most impressions for a tweet was about running serverless functions from a Docker image on Kubernetes. It had close to 16,000 impressions.

Create an @AzureFunctions 2.0 app from a #Docker image that triggers from #Azure #CosmosDB and binds to #SignalR for real-time communications #Kubernetes #K8s https://t.co/r5F44gmtho pic.twitter.com/67PZWqNOAp

The most (recently) liked tweet ironically had nothing to do with technology at all. It was a picture of a door stop I took that has a bit of a twist/pun related to “Game of Thrones.” That tweet earned 70 likes as of this writing.

The most clicked link I shared was for a project named “List” for working with immutable lists in JavaScript and TypeScript.

The second most clicked tweet was a link to the serverless eBook I authored (thanks for your interest and support!).

Right now followers are high but engagement is low compared to many other people I know on Twitter. I’d like to improve that. Any thoughts how? I’ll brainstorm this and set an action plan to improve my engagement moving forward.

Late 2017 I made the decision to move from my legacy blog hosted on Google’s Blogger platform to a new one on Medium. This is the first full year on that platform. I won’t compare to last year because I only had three months of data in 2017, but here are the stats for 2018.

I had 67,884 users visit over 95,150 sessions. The countries of origin align fairly closely to my Twitter demographics:

My blog gained Search Engine Optimization (SEO) over the past year and almost 69% of the traffic came in through search.

My top three direct referrals were:

The top 10 visited pages on the main (non-mobile) website include:

A little love for serverless and a lot of love for Web API design. This aligns very closely with my Medium statistics that also include mobile devices.

I share links using a custom link tracker I built so I can find out what everyone is interested in. In 2018 as of this post I analyzed 222,142 clicks. Looking at where I post links, Twitter continues to be the main source of activity (80% of all clicks) followed by LinkedIn (5.6%) and my blog (4.3%).

The majority of clicks happen around lunch time (across all U.S. time zones) but with an international audience there is steady activity around the clock. The most popular day to click was Tuesday followed by Thursday, and the least popular was Sunday.

The top five most clicked links of the year were:

I’ve said it before, and I’ll say it again:

Life is like going up the down escalator. If you stand still, you’ll fall behind.

I am grateful for a bountiful and productive year and eagerly await all of the changes to come in 2019.

.NET Core 2.0 is Ready and Sterling Proves It!  An Adventure in Redux: Building redux-adventure  Create a Content Security Policy (CSP) in Hugo  Deploy WebAssembly from GitHub to Azure Storage Static Websites with Azure Pipelines  JSON and the MongoDB Driver for the .NET Developer  Plasma gets Rust-y: Another WebAssembly Experiment  Raise Your Signal-to-Noise Ratio