The Year of Docker, Serverless, and .NET Core: 2017 in Review

I am a firm believer that it is difficult, if not impossible, to make progress without having a baseline to measure from. That is why every year I like to pause and review my accomplishments before setting goals for the new year (I don’t just do this every year — I’m a fan of setting daily, weekly, monthly, quarterly, and yearly goals). I also have said before:

Life is like walking up the down escalator: if you stand still, you fall behind.

That’s my way of saying that I believe every year should be different from the last and involve new learning and challenges. Have you heard the exchange before when someone asks an old friend, “What’s new?” and they reply, “Not much?” I don’t want to be a member of the “not much” club. In this post I capture a few personal accomplishments and goals, then sort through the analytics I have from my various blogs, social media, and click tracking tools.

On a personal note, key accomplishments this year were:

I made a short video to share that I believe captures the essence of what I love about being a developer. The music and dancing ninjas are from a “demo” program I wrote on the Commodore 64 in 1988 at the age of 13. The main programming feat for that particular section of the demo is reading the sound registers on the SID chip so that I can swap the ninja image and create the illusion of “dancing” to the beat. The plasma effect is a challenge I took on a few years ago to take a common demo effect and implement it in JavaScript, and the raccoon is “Bit” or the mascot for all developer advocates.

When I moved to this blog, I also took an “all-time” snapshot of my legacy blog, and wrote about that here:

🔗 Reflecting on 15 Years of Blogging

This tweet captures what I feel are the highlights from 2017 and what I look forward to in 2018.

In addition, I also believe that I will see and learn a lot more Artificial Intelligence and Machine Learning in the year to come.

There is a lot of data in this post, so if you have specific interests, feel free to jump around!

I ended 2016 with 9,165 followers and as of this post have 10,103. That’s a gain of around 1,000 followers or about 2–3 per day for the year. Although that may sound impressive to some, the total count is less important to me than the engagement and interest level. My goal with twitter is to reach developers, so followers who don’t really follow or interact don’t help with community reach.

In general, despite a large following, I didn’t receive as much engagement as I’d like. For comparison, some accounts with far fewer followers receive hundreds of likes, re-tweets, and other forms of engagement. My goal for 2018 is to continue to improve engagement through several means:

For the “signal-to-noise ratio” I currently review anywhere between 500–1500 items daily to curate what I believe are the top 5–10 noteworthy items to share with my followers. This is in addition to content I author myself. See the links and click data section to learn more.

The following stats are from the most recent three months (90 days) of Twitter.

92% of my followers list technology as their top interest, which is a good thing because my Twitter feed is almost exclusively developer focused. The top five interests of my followers are:

I have to give open source an honorable mention at sixth place and 69%. 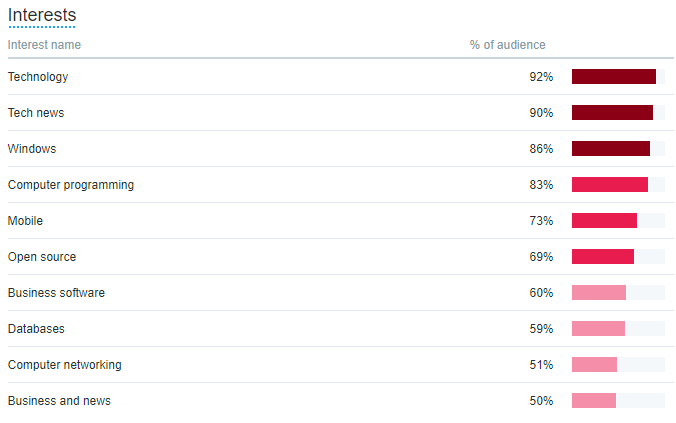 13% of my followers are female. That is up from less than 10% last year, but still shows that I have some work to do in order to reach and engage with a more diverse audience.

The top age category of followers is 25–34 or so-called millennials. Thank you for following a Generation X-er!

The most eyeballs landed on a post I shared about building a web service with F# in .NET Core. It was viewed 16,213 times.

The most liked tweet was one I shared to demonstrate how to install a Chrome extension that blurs sensitive information in the Azure portal while giving presentations or sharing your desktop.

Lots of reqs for the magic I use to blur secrets in the #Azure portal, even when I'm presenting live. Here you go: https://t.co/5rfCacIbIm pic.twitter.com/jCv3WEQiar

The most re-tweets I had was a tie between the previous tweet and the link I shared to the Azure Kubernetes Service (AKS) documentation.

The tweet about the Chrome extension also had the most link clicks (159). Second place at 118 was this status about debugging ASP. NET Core on Linux:

Finally, looking back at my most popular tweets based on engagement, the topics followers found most interesting were:

I also experimented a little bit with sharing some of my non-technology related hobbies, like hiking. I was surprised and pleased to see the pictures of my hike to Ramsey cascades was one of my more popular tweets (and no one complained that is wasn’t about software development!)

I had visitors from around the world, but as usual the vast majority were from the United States. 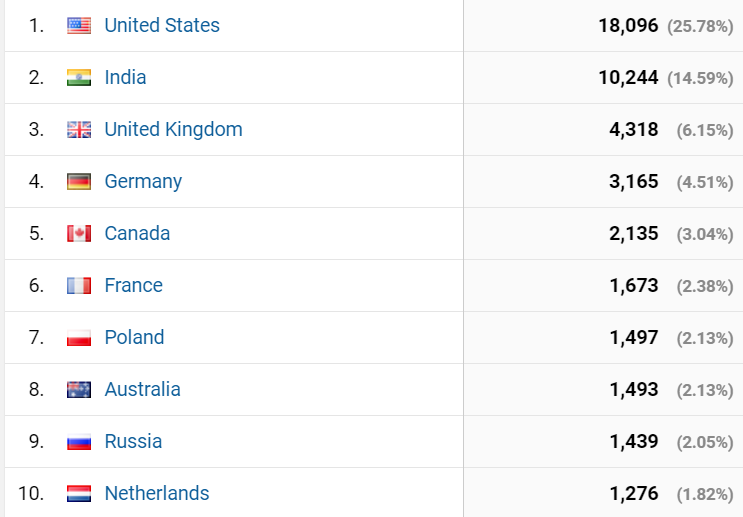 The majority of visitors found my site through organic search. This reinforces the philosophy, “Don’t break the Internet.” People are finding my old pages on search engines so I’m happy I chose to keep them available. 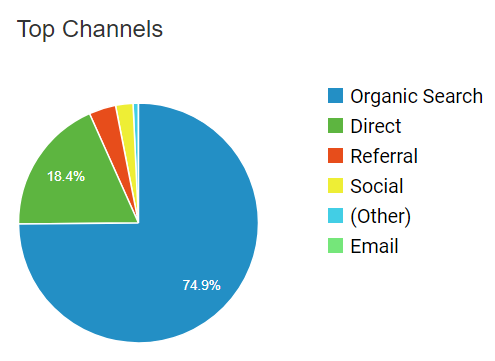 Almost all of the top search queries included some variation of MVVM, or “Model-View-ViewModel.” Those queries landed the majority of visitors on an article I wrote almost a decade ago that explains the pattern in detail (at the time, it was in the context of Silverlight, but ironically what makes MVVM unique is the data-binding aspect that ties it to modern day frameworks like Angular and Vue.js).

There were three main topics covered by the top viewed pages:

The Angular pages were mostly an older “top five mistakes” series I wrote about Angular 1.x, but there was one more recent article that made the cut at 1,847 views. Due to its popularity, I ported it to this blog:

Based on these statistics, I’m seriously considering writing an updated version of the MVVM article that tackles modern JavaScript frameworks and redirects from the old blog. Only time will tell if I end up doing that in 2018 — we’ll call it a “stretch goal.”

I made the transition to this new blog in August 2017, so statistics presented here are for slightly less than five months as compared to the full year for my legacy blog.

I had 12,450 users visit over 16,430 sessions. The geographic distribution of visitors to the new blog is significantly different than my legacy blog. 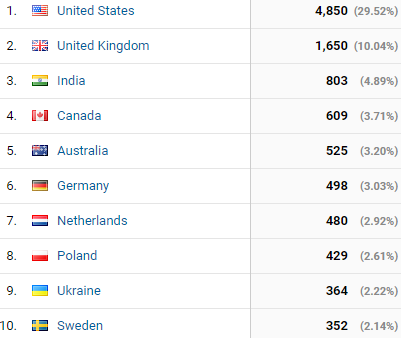 Developer for Life sessions in 2017 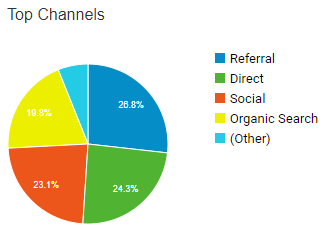 Developer for Life visitor sources in 2017

My top three referrers were:

I was happy for those referrals because they were all completely organic and I hope to see more.

Raw analytics from Google breaks down my top pages like this, but because my blog is on Medium there are a lot of visitors on mobile devices that don’t get counted on the main website. 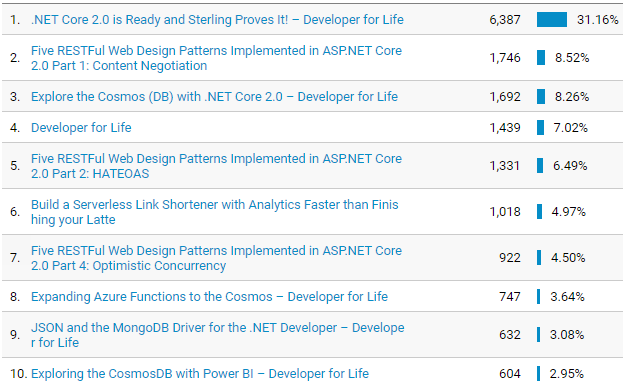 Moving over to Medium and looking at the past 90 days gives me this breakdown — the order is the same but the views are much higher: 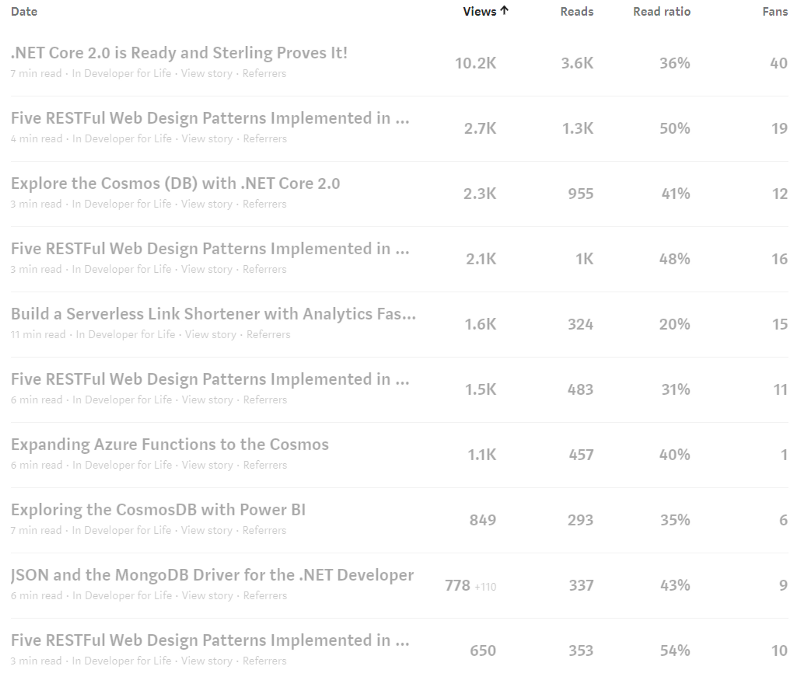 These statistics are helpful and show the blog move was net positive because I’m getting significantly more reads — 3,600 read an entire 7-minute article as opposed to 1,800 who viewed a page on my old blog and may or may not have even read it. I do like that Medium tracks where users are on the page and attempts to estimate who truly reads the full article.

I did migrate a few articles from my old site, but they didn’t even come close to making the top read pages.

Perhaps the most useful data I have is around link clicks. The previous statistics just cover my own universe — the “Jeremy Likness echo chamber” — and don’t truly reveal overall trends or what people are generally interested in (only what they are interested in that I also happen to write about). Earlier this year I built a link shortening tool so that I could track links I share across various social media sites, on my blog, in GitHub and on YouTube. You can read about it here:

And get the latest code that populates Cosmos DB with statistics here:

Using data I started collecting in September, just shortly after launching my new blog, I was able to track engagement to not just my own content, but other sites as well. I regularly publish content to my Twitter and LinkedIn profiles along with my Facebook page. I used to leverage Google+ but phased that out due to lack of engagement: despite thousands of followers I only had one or two users click through content.

Out of over 30,000 clicks tracked in 2017, the vast majority of engagement happened on Twitter: 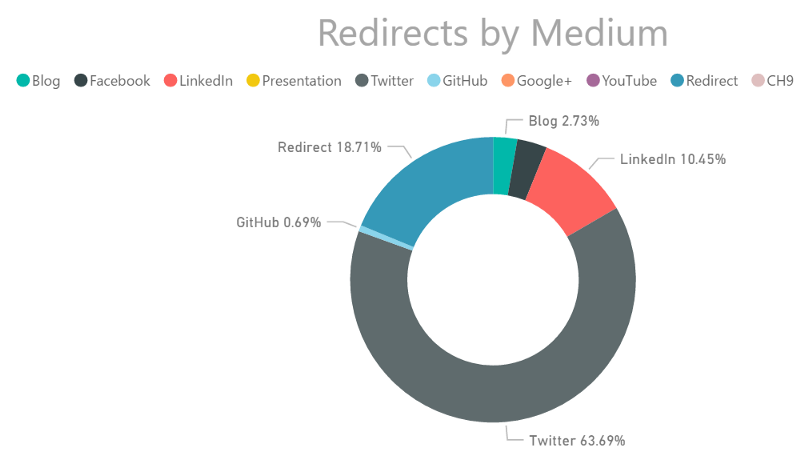 Redirects by source in 2017 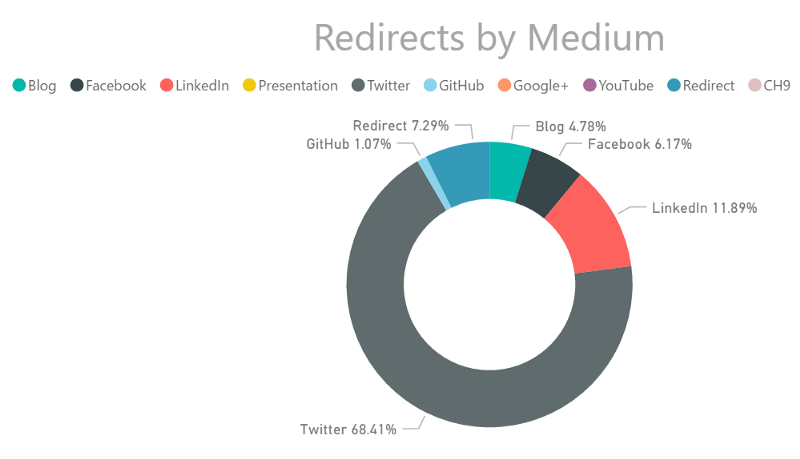 Redirects by source in December 2017

Almost nobody clicks links in my network between 7:00 pm Eastern Time and 8:00 am. I also rarely tweet during that period, which implies that most clicks are “real-time” in that users see the content posted and click when it appears, rather than scrolling through and engaging with content after it’s posted.

Outside of generic clicks to my blog, the top five clicked links overall last year were:

Of course, one important reason for tracking links is to better understand what’s not popular so I don’t waste your time. The least clicked topics included some of my conference recaps, and most links to documentation that were for broad topics rather than specific pages of information. It’s also interesting to note that clicks vary by medium (i.e. LinkedIn are interested in different topics compared to Twitter) but I’m still working on building out the right reports to pull insights from that data.As you can see, measuring data provides useful insights and helps me optimize where I spend my time and what topics to focus on. Although there is plenty of bias from my work and what I’m interested in, the trending topics this year definitely seemed to focus on containers, serverless, and .NET Core 2.0. Probably the only other major topic that didn’t get captured in my network because I know the least about it (and is a goal to learn more about in 2018) is Blockchain.

Thanks for taking the time to read these insights. As always I’d love to hear your feedback. Feel free to leave a comment on this blog or Direct Message me on Twitter!