Thursday I picked up a rental car, packed, and rolled out of my driveway the next morning at 6 am on Friday, October 6th, 2017 to head to the Microsoft Campus in Charlotte, NC. The destination? A weekend event called “Community Connections” designed to give back to the community and connect community leaders with Microsoft and each other. It was a fun and rewarding time. 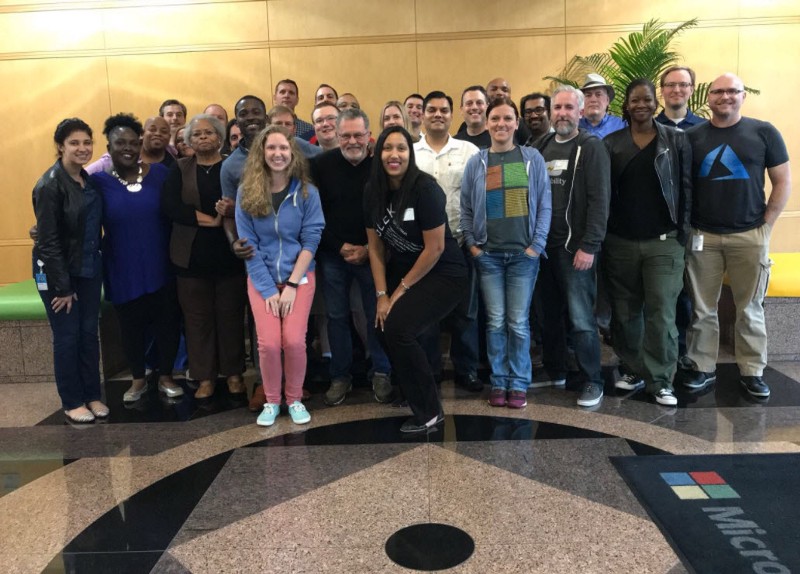 The first day was a full day training session that focused on how to create great videos. We learned about various formats for recording (such as slide deck, talking head and deck, demo, panel, “TED Talk” and other styles), different scenarios to cover (i.e. “how to,” “compare/contrast,” “product review” etc.) and how to determine the appropriate length. One fun fact I didn’t know before this training: the average attention span of a goldfish is nine seconds. Since 2000, the average attention span of humans has dropped from 12 seconds to eight. Yes, goldfish pay better attention than we do!

🔗 You Now Have a Shorter Attention Span Than a Goldfish

This was my first time on the Charlotte campus. I really enjoyed it!

Spending this Friday and Saturday on the beautiful #Microsoft #Charlotte campus with a great group of #mvpbuzz and community influencers pic.twitter.com/y5Cr9F6Jk4

Ultimately, the event was about connections, so we headed out to a local venue to have a little fun.

Then it was back to the hotel for some rest and to prepare for the next day. On Saturday we started out with a few great keynote presentations that covered organizational structure, discussed roles at Microsoft, recapped the MVP Program, and more. To capture that eight-second attention span, we started with an “ice breaker” game called “💣 Keep Talking and Nobody Explodes.” It was a lot of fun and the teams quickly tackled more complex scenarios and started cheering when they successfully defused a bomb.

The premise is that one person has access to the “bomb” while everyone else has a manual. The two have to work together. For example, if the bomb has wires, the bomb defuser describes the wires and the team uses the manual to figure out which wire to cut. The manual has directions like “if there are six wires, cut the third” or “if there are less than six total wires, and two yellow wires, cut the first” etc.

After this exercise, I decided everyone was sufficiently hyped to take the traditional 360° photo. Does this group look excited to you?

Next was a series of “How Cool” presentations. These were fast, 10–15 minute presentations covering cool topics.

We learned about “Industry 4.0” and how to control Halloween props with Kinect.

I shared the story of my URL Shortener.

We even learned how to brew beer!

Microsoft MVP @chief7 speaking on “How to brew a beer 🍺 “ at Charlotte Community Connection! pic.twitter.com/vmsLYYn4Fm

There was a presentation about creative uses for Docker containers.

We learned about global mentoring.

I discovered how flexible (and powerful) PowerApps are in this cool presentation.

We finished off with a short presentation I wouldn’t have thought possible just a few years ago: controlling software with the power of your mind using only a few hundred dollars worth of equipment!

After a delicious lunch we participated in a diversity and inclusion panel. This was very informative and we learned a lot about each other and ways we can make a positive impact across the industry.

I followed this up with a presentation on some of Azure’s new features including Azure Functions, Logic Apps, App Service (including Web App for Containers), Cosmos DB, Event Grid, Container Instances and Container Service.

“Machine Learning, AI, Azure - Where Microsoft is going and where to focus” by @jeremylikness at MVP Community Connection Charlotte pic.twitter.com/zzwJUcLYRN

We wrapped with a general Q&A panel discussion and then headed our separate ways. I reconnected with several awesome people I’ve known for years and created new connections I look forward to following, ranging from an Atlanta entrepreneur to a Birmingham user group organizer to several consultants looking to transition from their traditional roles to have more active, hands-on Azure experiences.

You can click or tap to learn more about the: Microsoft Valuable Professional award.

And that’s a wrap!