The Atlanta Code Camp is an event I’ve attended for several years now. My past three companies have all sponsored the event. It’s held on the Kennesaw State University Marietta campus, a great venue with free parking, plenty of space for gathering, and good facilities for presenters. Although there are no official tracks, there are often groups of similar sessions that cover topics ranging from soft skills, open source software and JavaScript frameworks to cloud and DevOps. I spoke in a room that had several talks that covered serverless. 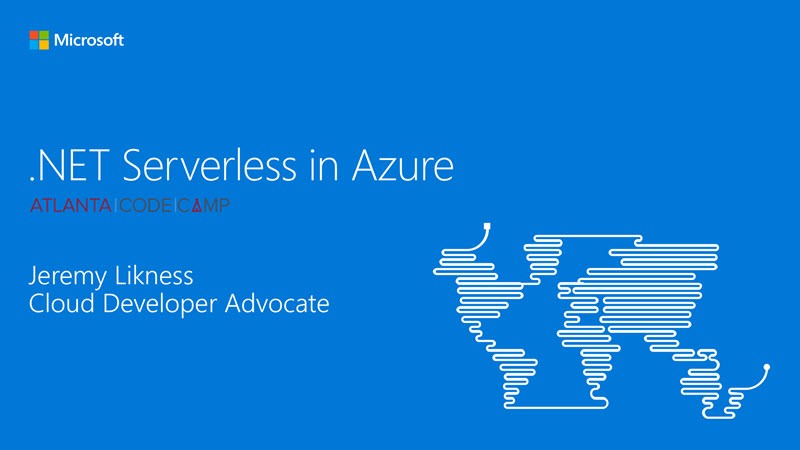 Although the presentation was scheduled for early afternoon (the second presentation after lunch) we had a packed room full of enthusiastic developers who were kind enough to consent to this 360° capture:

“And the crowd goes wild!”

The slide deck (linked at the end of this story) covers the evolution of deployment options from on-premises architecture through Infrastructure-as-a-Service (IaaS) and Platform-as-a-Service (PaaS) to Servless (and I emphasize that the same way NoSQL means “not only” SQL, Serverless really means “less server.”).

The following (silent) video demonstrates how to set up a simple serverless Azure Function that listens to an HTTP endpoint and echoes back the name that is passed to it.

Part 1: Create an Azure Function from the Portal

Next, I walked through the same experience starting using Visual Studio 2017. In this example, the echo service is enhanced to also store the name in a queue for later processing.

After the names are gathered in a queue, I show how easy it is to set up a trigger that listens to the queue, pulls the name from the queue, then uses Azure Table Storage to count the names.

Part 3: Create a Queue Trigger and use Table Storage

The audience submitted a few samples to process, and I highlighted my favorite.

After demonstrating function apps, I moved on to share the power of Logic Apps. These are cloud-based integrations and workflows that literally enable you to connect hundreds of end points ranging from web-hooks to APIs and more. Logic Apps support integrations with Office 365, Salesforce.com, Twilio, and many more third party platforms as well as Microsoft’s own Azure APIs like Cognitive Services. This video shows how easy it is to set up a trigger that listens for a Twitter hashtag then posts the content to a Slack channel.

The last part I covered is an important but often overlooked aspect of serverless: logging and analytics. Fortunately, this is extremely easy to add to your services with Azure Application Insights. This feature has so much functionality that I wrote a separate blog post to cover it all:

Here is the related video:

This is the full deck that I presented:

Thanks to everyone who attended. I had a great time and enjoyed networking with the developers there!